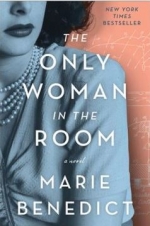 Monthly fiction book group reading an eclectic mix of contemporary literary fiction. Informal discussion about the writing style and how the book relates to our lives.

In January we will read The only woman in the room by Marie Benedict.

Hedy Kiesler is lucky. Her beauty leads to a starring role in a controversial film and marriage to a powerful Austrian arms dealer, allowing her to evade Nazi persecution despite her Jewish heritage. But Hedy is also intelligent. At lavish Vienna dinner parties, she overhears the Third Reich's plans. One night in 1937, desperate to escape her controlling husband and the rise of the Nazis, she disguises herself and flees her husband's castle. She lands in Hollywood, where she becomes Hedy Lamarr, screen star. But Hedy is keeping a secret even more shocking than her Jewish heritage: she is a scientist. She has an idea that might help the country and that might ease her guilt for escaping alone -- if anyone will listen to her. A powerful novel based on the incredible true story of the glamour icon and scientist whose groundbreaking invention revolutionized modern communication.

Copies are available to borrow at the circulation desk.